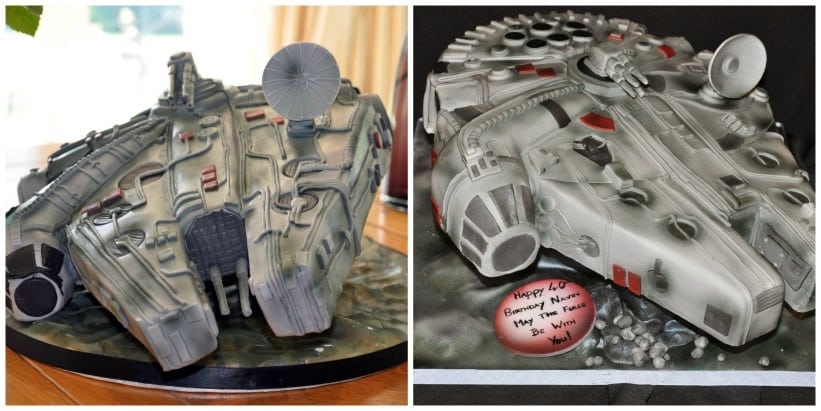 We have done several Millennium Falcon cakes over the years – some for birthdays, the odd one for weddings – and it is quite clear the enthusiasm for Star Wars remains as strong as ever.

As time has gone on we have perfected our techniques for producing Millennium Falcon cakes and after some trial and error we have come up with a way of doing it, which although messy, means we can repeat them time and time again.

It is also a cake which we will hopefully be teaching in our classes in the next few months over two days.

The Millennium Falcon cake is not an exact replica of the actual Millennium Falcon. To do that level of detail would simply not be cost effective from a business point of view but on top of that, there are so many variations of it out there that is impossible to know quite which is the original!

The thing with recreating a Millennium Falcon is we do it out of cake and sugar which is far more malleable than plastic and metal. It requires a bit of thought and planning.

I have made a collage of the pictures I took during the process to give you an idea of how it was done and added descriptions to aid you.

To start with though the cake begins life as a two layer 12″ round cake and 8″ square cake.

We cut a template from tracing paper which had been scaled up from drawings on the internet so the Millennium Falcon measures 12″ in diameter and all other measurements are scaled to that.

The template is then used to create a custom base board – this can be done using foam core sheets, available from art shops but needs to be strengthened with skewers being inserted horizontally where the front two forks come out. The better option is to use a thin layer of hardboard or mdf but then you have to use a jigsaw to cut it to shape – it all depends on how technical and engineer-like you want to get!

The main body of the Falcon is the 12″ cake, the two forks and the side pod are all carved from the 8″ cake. An extra circular disc, approx 4-5″ in diameter is cut to go on the top of the cake. Once you have the main bits in place it is a case of carving the shape according to the pictures. The two bits where the engines go on the sides are cut out and shaped into circles separately.

And then the rest is on the collage below: 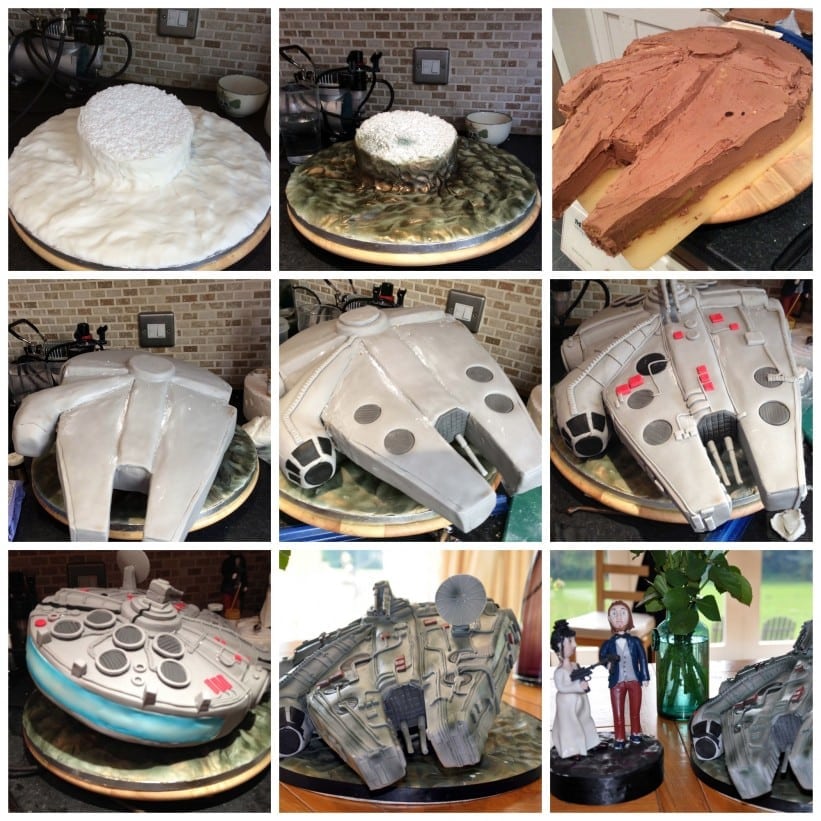 1. The base board is a 15″ board with a 6″ diameter, 3″ high dummy in the middle superglued to it. This dummy has been cut at an oblique angle to give the impression the cake is flying (do this outside because the polystyrene goes everywhere and it gets very messy!) The board and dummy are then covered in lumps of fondant, randomly to look like rocks so you don’t have to be neat about it.

2. The base is then airbrushed in black and gold/silver. Black first at an angle so you catch the undulations of the fondant and it is not all uniform then gold/silver second.

3. The Falcon is then carved by hand and eye into shape and covered with buttercream, in this instance chocolate. It is then put in the fridge for an hour or two to harden. Then, wearing gloves and using vegetable fat you rub your hands over the surface to get rid of ridges and smooth it out a bit. It then goes back in the fridge for another hour to harden off.

4. When it comes out apply more vegetable fat all over to help the fondant icing stick. The beauty of using vegetable fat over more buttercream is if you cock it up and have to remove the icing and start again you shouldn’t have loads of buttercream/cake stuck to it which means you have to throw it away. Don’t try and cover in one piece. Do the top part first, press the icing into place with your hands, smoothers and rulers, pressing in the relevant lines. Then to the sides in separate pieces. Don’t worry about the joins – the vast majority will be hidden by the details you apply.

5. Start adding in the detail according to internet pictures. There are certain bits that seem to be the same on all such as the darker circles at the front and back – use a small circle cutter to remove circles of light grey fondant and replace with darker or black, the same applies to the windows on the side pod.

6. Next start adding detail all over. We use an extruder a lot to produce bits that look like wires or pipes, squares for other bits and circles for others. Just start layering them up and covering the surface. You can stick as rigidly to the original one as you like or not.

7. For the back bit we draw a template that is about 12″ long and 1.5 – 2″ wide and round off the ends. Carefully cut this out of the back of the ship with a scalpel. Use the template to cut out another piece of white fondant and then airbrush lightly with blue top and bottom, leaving the middle whiter. As soon as it is dry but not set ( a minute or so) pick up and gently manipulate into the gap you have created.

8. Put the Falcon on the pre-prepared board using more superglue, add in the guns and satellite which are all made in advance out of pastillage. Use the airbrush to blacken it up and basically make it look a bit dirty and like it is flying through space. Spray the finished cake with edible glaze to remove any sugar/conrflour.

Though if you are still not sure then why not join us later in the year for our two day class. Email us to register your interest