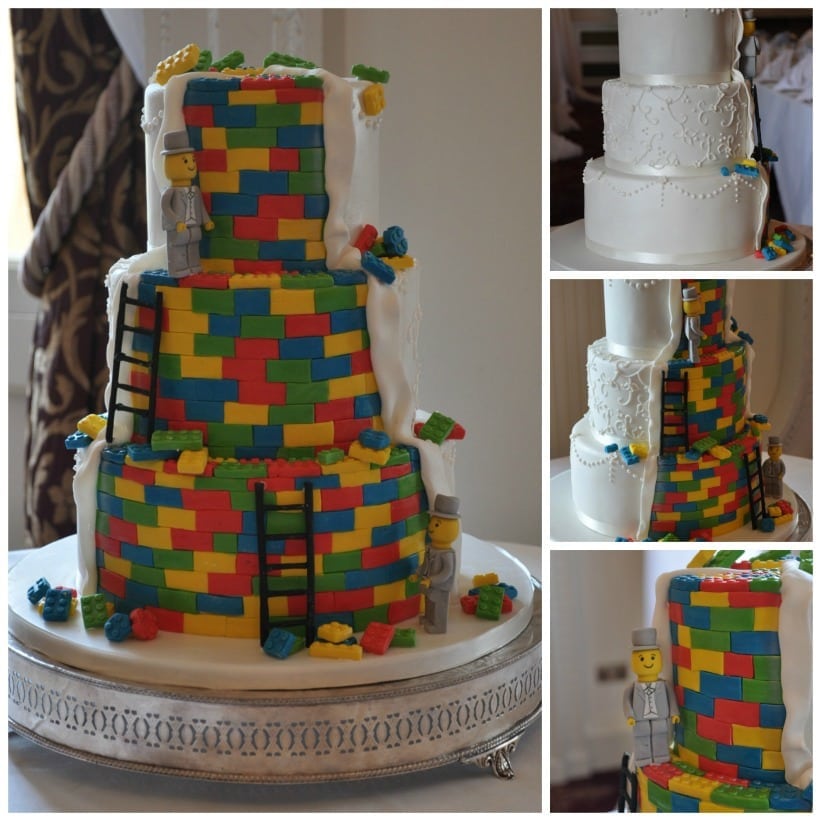 Everyone loves lego, young or old but it takes a bold person to decide to have it on their wedding cake. And yet, we are seeing an increasing number of people decide to introduce a bit of lego into their design.

What I love about this is it perfectly combines traditional wedding cakes with a bit of fun and modernity. What’s not to like about a lego cake?

The possibilities with them are also endless because you can make your lego cake look like you are building the cake yourself. You can have patches revealing the brickwork underneath and you can even create lego figurines to build the cake for you!

We did one last year in which the lego figurines were the grooms. One side of the cake looked perfectly white, normal and traditional but the other half was very much a lego cake with brightly coloured bricks and the grooms on ladders putting bricks in place. It was a total success.

More recently we have created one which was traditionally royal iced and piped as well as with pillars but there are patches all over it with lego showing through. We took an example of it to a wedding fair and it was by far and away the cake that drew the most comments. You would be surprised at the number of grooms-to-be who thought it was fricking awesome!

And yes, while lego cakes are awesome you don’t just have to confine it to lego. We will be working on one in a couple of months which will have a traditional white iced side one side and then Batman and Gotham City the other, how cool is that?!

Whether they are lego cakes, batman cakes, tattoo cakes the one thing that we do like about them and is important is this idea of what is underneath the icing. We like to give the impression that there is a whole world of fund underneath the icing, just waiting to be revealed.