This is hands down the best rich vegan chocolate cake I have ever had the good fortune to make and it. It’d dark, it’s chocolatey and it ticks all the right boxes that turn it from an average cake into a truly decadent dessert. From a cake decorating perspective it also provides a really nice firm base on which to work if you want to cover with fondant.

Now I really like to use almond milk in my vegan cakes because I just find it far more palatable than soya and less heavy than oat but really it’s up to personal preference. Obviously, if you have someone in your family (like I do) who is severely nut allergic, then you’ll have to opt for one of the others in which case coconut milk is my new favourite go to although you might get a slightly coconutty taste with that one.

We also need to talk vegan butter. My preference for this vegan chocolate cake is to use Stork blocks which are rather conveniently vegan. Don’t be confused with Stork tubs though as those are not vegan. Vitalite is also a good alternative and retains a somewhat buttery taste to it despite being plant-based. Flora plant butter though is a fabulous alternative, particularly for the icing as it sets up firmer than Vitalite or Stork. It comes in both salted and unsalted varieties – you can get away with using salted in the recipe if you like that sweet/salty contrast but definitely stick to unsalted for the buttercream. There are increasing numbers of vegan butters on the market but those tend to be the ones I stick to in the main.

Finally, let’s mention the buttercream. The version in this recipe is a basic buttercream which serves its purpose and tastes delicious but you can level up even more if you want by creating a vegan chocolate ganache using dark chocolate such as Montezuma’s or Moo Free. Montezuma’s is one of my faves because it loses none of its flavour by being dairy-free. Add this to coconut milk, heat and mix to form a vegan ganache – normal ratio is 2 parts chocolate to one part milk so for a cake like this try 250g chocolate mixed with 125g coconut milk. Make up an ordinary buttercream with vegan butter and icing sugar, roughly the same ratio as the ganache – two parts icing sugar to one part butter – add a dash of vanilla and then mix in the ganache, which should be cooled but not firm, to taste. 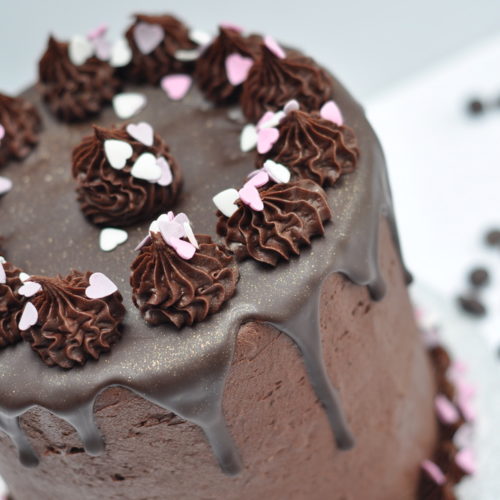